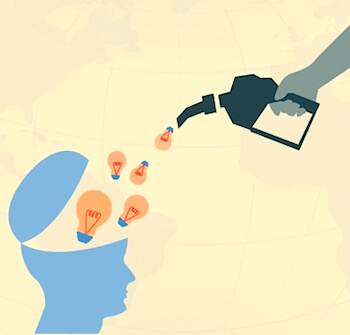 Our thanks to media relations expert and award-winning author Christina Hamlett for this guest post. Graphic courtesy freedigitalphotos.net

If your storytelling skills need a jumpstart or if you’d just like to persuade your Muse to stop moping around the Land of Writer’s Block, the following exercises are guaranteed to get the new year’s creative juices flowing.

Grab your laptop and head for the nearest place to buy yourself a latte. Your assignment is to observe the clientele and see what kind of fictitious stories you can create about them. What does their clothing, body language and general appearance suggest? Are they on their way to work? What kind of job do they have? Do they appear to be waiting for someone?

Once you’ve finished your notes (and for goodness sake, never stare or come across as an urban stalker), start constructing a plot in which you speculate what will happen to this people in the next 24 hours.

One man’s junk is another man’s treasure. The next time you’re at a neighborhood yard sale, stop in and buy something. It doesn’t matter what it is as long as its presence tweaks your curiosity. Does it seem out of place amongst the other items? Is it something that’s obviously well worth more than its price tag? Or is it something so ugly and impractical you can’t help but wonder how many birthdays and Christmases it has been recycled? Whatever it is, make it the star of your next short story.

Tell yourself that the next song which comes on the radio has been picked to be the soundtrack of a new movie. Your job is to come up with a plot for that movie by the time the song finishes playing.

Have you ever run across obituaries where an entire estate has been left to one’s beloved cat? Or perhaps you’ve read about little old ladies who lived in the same town for years and not a single soul ever knew what exciting lives they had in their youth. Not only is there a wealth of intriguing back-story to draw from in these various accounts but also creative musings regarding the settlement of their estates.

“A rock star and a nun are a shipwreck’s only survivors.”

“A murder victim returns to Earth as a circus bear.”

“A girl defies her parents’ wishes and dates the village idiot.”

These are the kind of teasers you find in TV guides for upcoming programs. Such vague descriptions provide a lot of latitude for your own creative plot-weaving, don’t they? Take the bear story. Has the bear returned to find his killer? Is he being punished to atone for the bad way he treated animals in his job as a zookeeper? Is he under a curse that will only be reversed if the right person kisses him on the nose?

Try spinning these ideas to fit different genres. For instance, a rock star/nun musical will be a different tone than one in which the rock star is psychotic and killed someone before he boarded the ship. And maybe that village idiot who seems so harmless has a secret nobody knows – that he turns into a werewolf every full moon.

Every writer has a drawer full of unfinished stories. Now is the time to pull them out, read them over, and construct three different endings for them. This will force you to examine whether your storyline has provided for outcomes other than the predictable one you may have been writing all the clues toward.

What would happen, for instance, if Romeo and Juliet hadn’t died? What if Cinderella’s feet had swollen and the glass slipper didn’t fit by the time Prince Charming tracked her down? And speaking of footwear, what if Dorothy’s ruby red slippers were defective and she was forced to stay in Oz forever?

There’s no shortage of lonely hearts in the world, many of whom utilize the classifieds as a way to connect. Have you ever wondered what it would be like to play matchmaker and orchestrate an introduction between Ms. C-5 and Mr. G-49? For this story-starter, pick two people with the least in common and craft a situation whereby they have to work together to reach a goal, solve a crime, save the planet, etc. Tempers flare, sparks fly, worlds collide! Can true romance be far behind?

4 thoughts on “Jumpstart Your Writer Imagination”