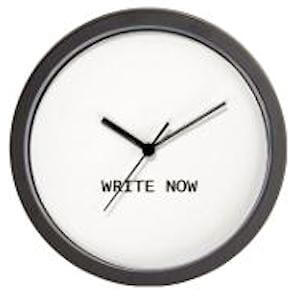 Our thanks to editor and Pressque founder Ellie Maas Davis for this guest post!

“To be a writer is to sit down at one’s desk in the chill portion of every day, and to write; not waiting for the little jet of the blue flame of genius to start from the breastbone—just plain going at it, in pain and delight. To be a writer is to throw away a great deal, not to be satisfied, to type again, and then again, and once more, and over and over…” –John Hersey

Becoming a writer is about routine and commitment, commitment and routine. No matter what the genre, a writer must have discipline, so don’t let a single day go by without writing. It’s the same as being an athlete, it takes daily practice—it’s work—if you want to be good.

After I had my daughter it felt like I had no time for anything. What with a newborn and a growing business, it was a losing battle to carve out a single hour. It’s what I thought I needed, an hour or two at the very least. I genuinely thought if I couldn’t spare an afternoon being lost in the shuffle of wordplay then it was hopeless. Six months passed without me writing a word when poet Carol Ann Davis offered sage advice: find fifteen minutes to write. Over the next five years it’s that fifteen minutes that’s changed my writing life. So while my bread and butter is editing and ghostwriting, each day I dedicate fifteen minutes to my own writing.

It’s been noted that James Joyce, after a “successful” morning of writing was glad to have three sentences. And let’s face it there are times when it takes seven hours to write three sentences. It makes me wonder how long it took Ernest Hemingway to write his six-word short story:

To be fair, the muse controls so much of what writers accomplish with the time we’re afforded. But I know one thing for certain: even when she’s most fickle, my muse is happiest with daily offerings, even if it’s only fifteen minutes, at the very least, she knows I’m serious.

If you’re a writer who’s not written today, sit down for the next fifteen minutes and get to work.

But do take a moment and tell us about your own writing routine with your comment below – what keeps YOU writing?

Ellie Maas Davis is the founder of Pressque, a nine-year-old publishing consultation firm that offers editing, ghostwriting, and screenwriting services to authors and publishers. She has ghostwritten over twenty works of nonfiction, and is a go-to editor resource for the WWW team.

10 thoughts on “What’s Your Writing Routine?”