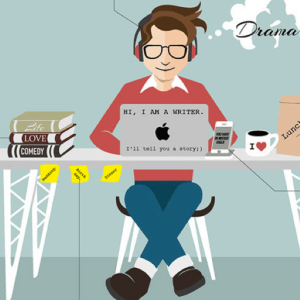 Our thanks to Brendan Brown, Founder of Global English Editing, for this guest post and nifty infographic!

Friends impact our lives in a big way, and along with family and Sesame Street, help mold us as people. They’ll rightly mock you for unfashionable taste in clothing, but will enter protection mode when someone else disrespects.

A great friend will be your partner in crime, and boost self-confidence without stroking your ego. And hopefully, they’ll provide years of fun, laughter and good times. We all need friends, but like alcohol, quality inevitably trumps quantity.

Have you considered adding fellow writers to your friendship circle? This might sound like a dubious suggestion. After all, writers are stereotyped as being broody, moody and melancholy. Writers appear to be difficult friends indeed.

However, as an editor, I interact with plenty of writers and have made friends with more than a few of them. I think they make great friends (just not for the reasons you might think).

The infographic below explains why I think writers make incredible friends… 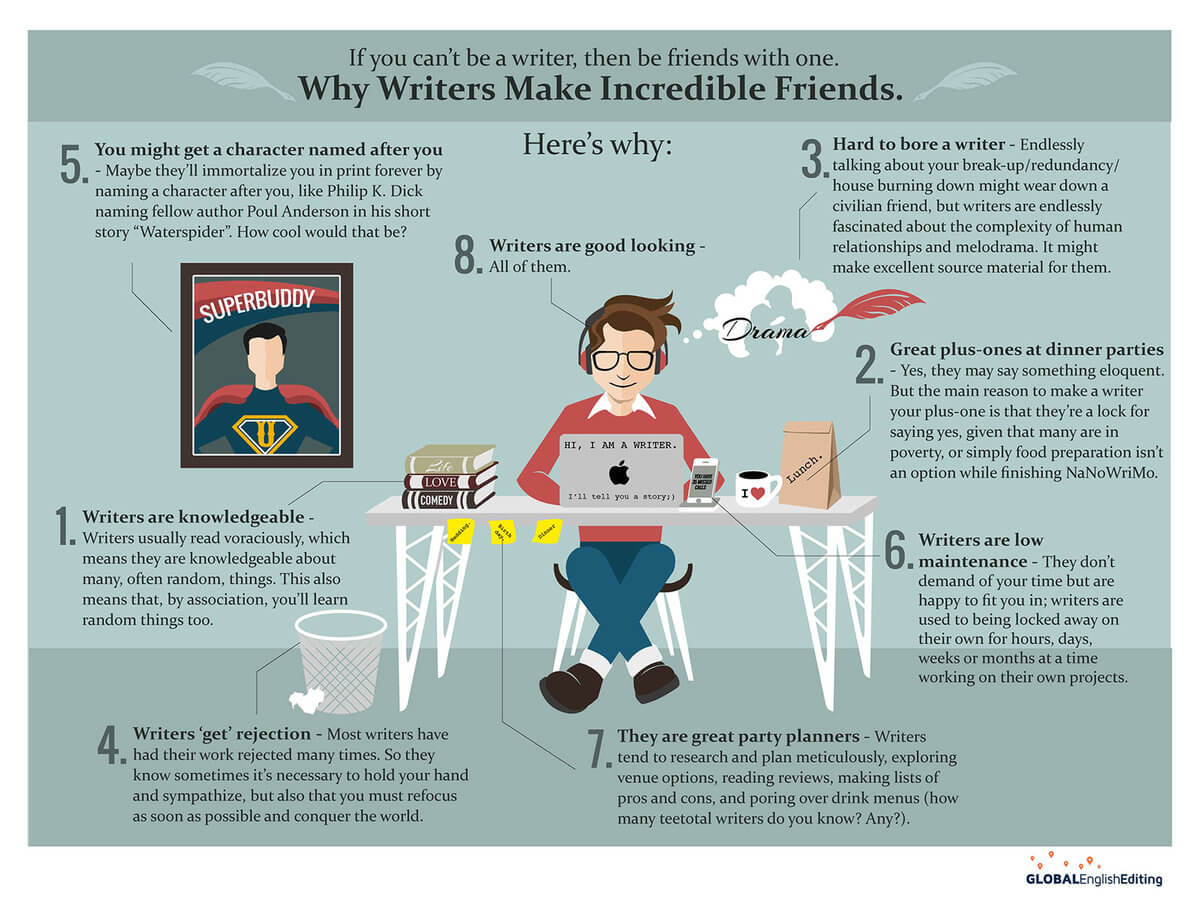 ‘Knowledgeable’ probably wasn’t on your list of most desirable traits in a potential friend, but think about it. Nobody likes awkward silence. Lulls in conversation tend to come about when there’s nothing to talk about, but writers are often repositories of information ranging from the random to the hilarious (and inevitably the tedious).

When you’re at a party, sit next to the writer and you’ll hit the conversational jackpot: they’ll not only be up to date on the latest world events, but will also fill you in on what Kim Kardashian’s booty has to do with feminism.

Offer a writer free food and they’ll rarely flake out on you.

Some might be in need of a good meal, being that they survive near the breadline on a daily basis or have been trying to finish NaNoWriMo and preparing food simply wasn’t an option.

Others may well be well on their way to a successful career in journalism or travel writing, but have never quite shaken those nightmares about being strangled in their sleep by ramen noodles. A catered-for dinner party is like therapy for them.

Most of your friends are probably fed up with hearing about your ex or how unreasonable your coworkers are. Instead of venting to them, turn to your writer friend.

Writers lap this stuff up. For you it’s catharsis, for them primary research. They’re probably working on a series of essays about how the monotony of everyday life is crushing the creativity out of a generation. Get ready for engaged questioning – “but why do you think you feel that way? Do you think there are societal forces preying on your mind, creating an unrealistic image of who you should be?”

If your rant is their brainstorm session and you’re helping each other out, isn’t back scratching what friendship’s all about?

Even when they professionally benefit from your pain, writers are compassionate. Not because they’re inherently better than regular civilians, but because they’ve been through it all too: mind-melting jobs in call centers, getting dumped for spending too much time on their work, and being isolated from human contact for days or weeks at a time while writing.

Writers know your pain. Most of all, though, writers get rejected a lot.

You got turned down for a promotion this week? Your writer friend probably got turned down for three article pitches today. When you need a shoulder to cry on, writers are there to be your friend. But most importantly, they’ll insist you get back up on your feet and try again.

Look at your friendship with a writer as a potential investment in future notoriety. If you’re in your writer friend’s inner circle while they’re working on a novel, you might get a character named after, or even loosely based on, you.

There are many examples of this, known as Tuckerization, but a notable one is Philip K. Dick naming fellow author Poul Anderson in his short story “Waterspider”.

This might be the best reason why writers make great friends. Writers are busy but flexible, sociable but focused.

They find it difficult to be there for needy people, as their timetable doesn’t allow for it. But on the flip side, when you don’t call them for three weeks, that’s okay by them. In fact, it’s probably appreciated when they’ve got deadlines to meet.

You may not see a writer friend very often, but the time you spend together is usually pretty awesome.

Writers tend to spend an inordinate amount of time researching and planning. So, when it comes to organizing something – whether it’s a book, article, or party– writers are meticulous and know how to sort out the important details.

If they help plan your party, they’ll pore over menus and choose drinks wisely (how many teetotal writers do you know? Any?). People will talk about the party for weeks, wondering where you got those little things with the gorgonzola cheese and the figs from. They were delicious.

Oh, your party planning friend will also be budget-conscious, so you’ll also end up with a perfectly planned bash, unique cocktails and canapés, all of which cost a relative pittance.

In high school most writers passed their time by reading books, and actively not dating. But some have since blossomed into decent looking creatures.

While the daily yoga session is theoretically designed to keep writers from morphing into Quasimodo as they type away on their computer all day, it’s not too bad for the abs either. Add to that their tasteful, hipster wardrobes, and they’re basically solid nines all around.

Anyway, writers have to be good looking these days it seems.

So go out and meet other writers!

The bonus reason that writers make incredible friends is because the good ones love paying it forward.

Successful writers were all once a student or waitress on minimum wage. Many found their inspiration and resilience in those days, and while none of them can give you the nonexistent secret formula to success, they can commiserate, support, and offer insights.

If you’re an aspiring writer, go out and make friends and find your support group. Websites like meetup.com can be a great start, and also check out groups for writers on social media. If you’re a location-independent ‘digital nomad’, like I am, connect with local writers and editors.

And remember, once you experience some success in your own professional writing life, be the kind of good writer we’ve described here. The one who everyone wants to be friends with.

2 thoughts on “Why Writers Make The Best Friends [Infographic]”