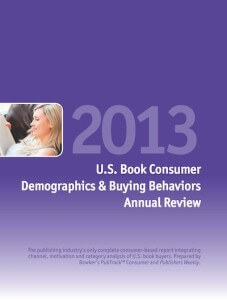 Some fun and interesting publishing insights today on both the ebook and traditional print book markets: Bowker recently released its  2013 U.S. Book Consumer Demographics and Buying Behaviors Annual Review. The full report is $799, but their free preview is available at the link, with some interesting statistics that bear watching by authors, including:

And in more released stats, according to Infodocket.com:

The study is based on information from Bowker Market Research’s consumer panel of almost 70,000 Americans who bought books in 2012. The 2013 Review is available by visiting www.bookconsumer.com. Through August, the report can be purchased for $799 for a single-use PDF or print copy. After August the price rises to $999.