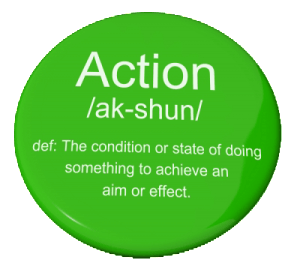 Our thanks to author, coach and speaker Kayce Stevens Hughlett for this inspiring guest post, and to freedigitalphotos.net for the graphic…

“Thinking is easy, acting is difficult, and to put one’s thoughts into action is the most difficult thing in the world.” Johann Wolfgang Von Goethe

As writers, we are constantly navigating the places between thinking and action… the spot where we sit down to write and pray the muse will take over… the desert times when even thinking is difficult… and the amusing times when we imagine that words will appear on paper while we reorganize our desk for the 1000th time or look for dust bunnies beneath the refrigerator.

When I was writing my first book, As I Lay Pondering: daily invitations to live a transformed life, I used to dream that someone would gather up my dozens of journals, see the brilliance within my hand-written pages, and edit them ever-so-slightly into an instant bestseller.

I mainly focused on the notion that someone else was going to do the work for me; that if it was truly meant to be, it would manifest like Harry Potter’s Patronus. After all, I’d set my intention and what we intend has a high probability of occurring. Just ask any prosecuting attorney who catches a thief in the act.

The thing about setting our intent on something we truly desire is rather like creating magic and there is no getting around the fact that action is required, (especially when it comes to writing). Someone has to put thoughts onto paper if they’re going to be read. Even in my fantasy world, action was required. I just envisioned someone else doing the lion’s share of that work.

My personal observation is that in those early stages of As I Lay Pondering, I was simply writing journal entries. My only intent was to focus on what might help me feel grounded and more present to everyday life. I wrote this way for two or three years until one day a dear friend said, “You know you have a book, right?”

All along I’d been writing like a crazy person (i.e. a writer) because I couldn’t imagine doing anything else. I didn’t intend to make it a book. My number one motivation was to get something outside of me and onto the page. I was putting my thoughts into action.

I started an anonymous blog and began to share with others what was rolling around in my brain. In the process, a lovely byproduct began to occur… people were inspired and connected to what I had to say. This response emboldened me to write and share even more until, voilá, I’d written nearly 300 entries of a book in the making.

That’s when the writing got harder. I shifted my focus from my own process to what I thought the readers wanted, and here I offer a word of caution. When I write with a focus to dazzle and wow other people, my writing often gets stale and rigid. If I try to guess what you want, then I lose my own connection with the work, which is most often where the magic happens. It’s kind of like focusing on hanging prepositions in a first draft or worrying that your hand writing will be too sloppy for book signings in the distant future. It isn’t helpful.

To produce a blog post, magazine article, or novel, we, first, have to sit down and write. We must take action. We’ve all heard it before… We have to Show Up!

Somehow I made it through the publication process for Pondering and today I stand at a new threshold with my debut novel, Blue. It’s time to do the hard work. One step at a time. I’ve laid the groundwork. I showed up and completed a manuscript, one word at a time. Just as my first book didn’t start out as an official writing project, Blue began as somewhat of a lark. My non-fiction writing was blocked, so I took the Nanowrimo (National Novel Writing Month) challenge to do something different. Showing up day after day turned into a grand adventure and a sizeable first draft.

The last time I wrote here at Where Writers Win, I was looking for a publishing home and stated that intention to the world. A few days later, Voilá! My work was accepted by BQB Publishing. Magic? Intention setting? Hard work? Putting thoughts into action? You decide.

How are you putting your author thoughts into author action?

Kayce Stevens Hughlett is a published author, long-time blogger, and contributor to several collections and online publications. Her 2012 non-fiction book, As I Lay Pondering: daily invitations to live a transformed life, is a lyrical and lucid treasure that invites readers to new awakenings throughout the year. Currently, knee-deep in the publication process for her debut novel, Blue, Kayce is a self-proclaimed artist of being alive. In her roles as writer, speaker, lifestyle coach, and ponderer extraordinaire, she invites individuals and groups to playfully and fearlessly cross thresholds toward authentic living. Visit her at www.kaycehughlett.com.