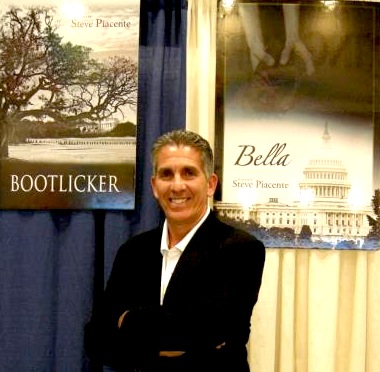 Our thanks to author Steve Piacente (pictured right with his titles at Book Expo of America) for this insightful post. It definitely pays to have a well-crafted “About the Author” on your book and your website, and Steve’s suggestions are right on point!:

“Alice always wanted to be a writer. She’s married and lives in southern Ontario with her husband, three children, and two cats. They all like mac and cheese.”

It always baffles me when writers creative enough to craft a 300-page novel spin the story of their lives into a batch of boring paragraphs that do little to explain who they really are or entice readers to check out their books.

Your About the Author shouldn’t be a chore to write or read. Some tips:

1. Consider what was going on when the stork landed at your parents’ house and weave in some history. I was born in 1954. Looking back, and with a little help from Google, I opened my website bio with:

It all began for me in 1954. Eisenhower was president, no one beat the Yankees, and Elvis was still an unknown. TV was three channels and two colors, black and white.

2. Briefly explain what fired your writing gene. My story:

Growing up, I didn’t particularly like school. I liked baseball, egg rolls and comic books, and it was Superman that got me interested in reading and writing.

3. Just as when you write fiction, provide details that move the action forward:

Raised in New York and educated in Washington, I kept moving south after college, eventually learning all they left out at journalism school at the feet of street-smart newspaper editors in Florida and South Carolina.

4. Be conversational, open and personable. My piece continues:

In 1985, one of those editors found me presentable enough to send back to D.C., this time as correspondent for the Tampa Tribune. The job ended four years later, and I found myself in steep competition for a similar slot with the Charleston, S.C. paper. I remember pumping the Charleston editor’s hand and pleading, “Please don’t let me become a press secretary.” The man was merciful, enabling nine more years of Washington reporting, and front row exposure to the real South, as Charleston is far deeper into Dixie than Tampa, geography be damned.

5. Now it’s time to circle back to writing fiction:

Though Bella was my first real fiction, some thin-skinned politicians would say the stories I wrote about them were just as fabricated. In fact, no fiction bubbled up until I earned my license to write in the Johns Hopkins Masters program in 2000. During this time, I also reentered the classroom at American University, my alma mater, and began teaching journalism classes.

6 – Give a glimpse of your private life, but don’t go overboard.

My insistence on clean, tight writing did no lasting harm to our three children, now taxpaying adults in the fields of public relations, art therapy, and engineering. It wasn’t until years later that I learned that the kids snuck secret help from their mom, a special education administrator in the Montgomery County (Md.) Public School System.

If it helps, think of all this as a first date. If you want a second, don’t make the story of your life a resume. Make it a short story, one that makes readers want to take the time to learn more, and by extension, take a look at your work.

Author Steve Piacente (@wordsprof) has been a professional writer since graduating from American University in 1976. In 2010, he self-published Bella, the story of a widow’s quest to uncover the truth about her husband’s death on an Afghan battlefield. Bootlicker, a prequel focused on a dark secret that imperils a historic election, came out in late 2012. Steve started as a sportswriter at the Naples Daily News, switched to news at the Lakeland Ledger, and returned to D.C. in 1985 as Correspondent for the Tampa Tribune. In 1989, the native New Yorker moved to the same position for the Charleston (SC) Post & Courier.  He is now deputy communications director at a federal agency in Washington, D.C., and teaches journalism classes at American University. Contact Steve at steve@getbella.com. His novels are available at www.stevepiacente.com

19 thoughts on “Six Tips to Crafting a Better Author Bio: Write A Life Story Worth Reading!”