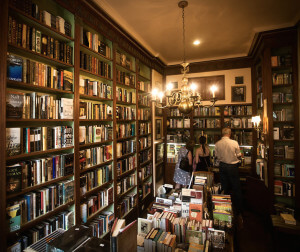 The short answer is yes, it is possible to get brick and mortar bookstores to take your self-published books, but it isn’t an easy option. The simplest course is to hire someone to get your e-book set up on every available platform including Nook, iBooks, Kindle, Kobo, etc., and then market like crazy online.

But today I am highlighting an author and how his perseverance with booksellers continues to pay-off, over a year later.

A gentleman hired me to work on his debut novel. It was well over 450 pages long and he wanted to print it in hardcover–did I mention he was doing this by himself?  The book was professionally edited, a compelling story, and he did everything he could to maximize the actual look and feel of the product with beveled edges, a beautiful cover, and decorated end papers.  Next, he set up his own press, where he featured other previous non-fiction work (of his)  as well as his upcoming titles.

Now, he wasn’t a person who had grown up through the digital age, and the whole Twitter, Facebook, Tumblr, and Goodreads world was not something that came naturally.  What he was hoping for was attention in traditional newspapers like the New York Times, which I told him was not going to be an option, even though we did try.

In the old days (like 10 years ago) if you wanted to build interest in a novel by a new author, one path to success was to market heavily to the independent bookstore market. But independent bookstores are not necessarily selling venues for independent writers.  ooksellers have been hurt by the advent of e-tailers and the decrease in sales of print books just like everyone else in publishing.  They have only so much shelf space and they have seen and heard every pitch.  But that didn’t daunt us, or our author, in this scenario.

In fact, we put together the most thorough list of independent booksellers in the Northeast, along with the local chain.  Our author set his hardcovers up with a distributor for legitimacy and also just for ease of distribution.  I mean, whose back can hold up packing and shipping cartons of big hardcover books from their house?  He also offered traditional publishing terms with a 40% discount to booksellers off the cover price and free shipping BOTH WAYS.

Then we all hit the phones.  “You are representing who?  And What?”;  “Send it to me and I’ll see what I can do.”; “I have a pile a mile high of potential sellers.”  These were some of the responses we received.  But we marched on with the knowledge that there were 2000 copies of this bad boy to get out the door.

We emailed and pitched with every possible thing we had; we offered additional marketing materials and advertising; we even offered to give them the books if they just tried to sell them during their busy seasons.

In the meantime, our author was setting himself up for appearances where he promised to show up at the store, sit at a table, and simply sell and sign the books for the store.  I think between what we set up and what the author did himself, we had almost twenty stores for him to visit.

In the last couple of months I’ve been receiving requests for copies of the novel’s book jacket for event promotion, from Barnes & Noble to independent stores.  I hear the book has gone into a second printing.  It is just over a year since the book was originally published.

I was told that E. Lynn Harris sold books out of the trunk of his car before becoming a bestselling (romance) author.  It’s not the same genre and it’s not the same time period, but I learned a few things from this experience:

2. If you leave your pride and ego at the door, much can be accomplished. (If it isn’t already, this one could be inside a fortune cookie.)

I’m not necessarily recommending this way as a means to a selling end, but I am just pointing out that there is always an extreme case out there where something initially thought impossible, becomes possible.  Was it the best course of action?  It was what our author and the book needed in order to get noticed.  Did it get the book where we wanted it to go?  There are movie options being discussed and books definitely got sold!

7 thoughts on “Will Bookstores Sell Your Indie Books? A Self-Publishing Series Case Study”