Our thanks to author Steve Piacente for this guest post!

If 80 percent of Pinterest users are women and women buy most of the books, authors need to be on Pinterest.

Problem is, authors traffic in words and Pinterest is all about photos. How can writers ever leverage the site to sell books?

Here’s are five ideas to get started:

1 – Cover Story (one): Readers always want to know how you came up with your cover. The answer probably runs parallel to your writing, in that there were lots of drafts before you were ready to publish. Try telling the story of your cover in sequential photos, as I did here.

2 – Cover Story (two): Hopefully you saved the rejected covers. Some of mine were awful, but they made for an interesting Pinterest board. See:

3 – Illustrate, Illuminate: Every author offers excerpts. I found an aspiring (read: not too expensive) artist who illustrated several excerpts. They made a nice addition to my website as well as a simple Pinterest board. Check out:

4 – Remember Oz: If you’re doing a video trailer, make sure to take readers backstage with some behind the scenes photos. Everyone is fascinated by what happens when you pull back the wizard’s curtain. My trailer shots:

5 – Overseas Ads: When you or friends are headed abroad, take or send your novel. You’d be amazed at how many opportunities come up to snag a photo beside a famous landmark or in the hands of a colorful local. During a trip to Thailand, I visited a museum where a Geisha girl was outside. I asked her to pose with the book and she gladly complied. Could she read it? Does it matter?

7 – Reading Recs: If you’re an author, you’re probably already on Goodreads. (If not, you should be). If you are, another idea is to review books instead of just asking people to weigh in on your novels. If you do, take screenshots of your reviews and create a Pinterest board like this one:

8 – Road trip: Have you done some kind of book tour? Those photos you took, with a few words about lessons learned, will make a helpful Pinterest board. See:

For those who’ve missed the Pinterest craze, think newspapers and magazines, a scissors, pushpins and a corkboard. Now subtract the scissors and pushpins, and place the word “digital” in front of “corkboard.” It’s that simple.

The hottest category is weddings, but “favorite books” is also in the mix. Authors are also using the site to organize their drafts, market their books with boards about plot and characters, and to learn what other industries are doing to make their products surprising and appealing.

The transition from creative writing to creative marketing is not optional for anyone trying to sell books, and that’s nearly all of us. The good news is that Pinterest not only gets you close to lots of potential readers, it’s also fun. 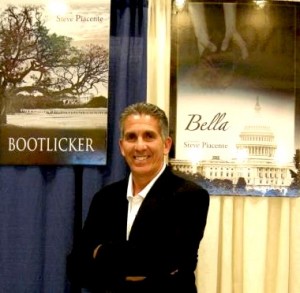 Author Steve Piacente (@wordsprof) has been a professional writer since graduating from American University in 1976. In 2010, he self-published Bella, the story of a widow’s quest to uncover the truth about her husband’s death on an Afghan battlefield. Bootlicker, a prequel focused on a dark secret that imperils a historic election, came out in late 2012. Steve started as a sportswriter at the Naples Daily News, switched to news at the Lakeland Ledger, and returned to D.C. in 1985 as Correspondent for the Tampa Tribune. In 1989, the native New Yorker moved to the same position for the Charleston (SC) Post & Courier.  He is now creative director at The Communication Center in Washington, D.C., teaches journalism classes at American University, and is at work on his third novel. Previously he served as deputy communications director at a federal agency in Washington, D.C. Contact Steve at stevepiacente@gmail.com. His novels are available at www.stevepiacente.com