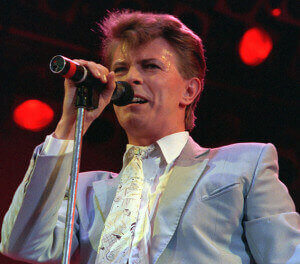 Our thanks to publicist Lynda Bouchard for this guest contribution. And our thanks and admiration to David Bowie, an inspiration to so many…

“I don’t know where I’m going from here, but I promise it won’t be boring.”

Ever since ‘Changes’ was released in 1971, I’ve been a huge admirer of David Bowie. He was a mind-bending trendsetter who never stopped reinventing himself. It seems he was reinventing right up to the end. His final album, ‘Blackstar’ was a parting gift carefully orchestrated for his fans.

Bowie was a consummate artist and marketing genius. Writers take note. Creativity lives in the margins of life and Bowie always danced on the edge. He was fearless.

Musicians and authors have a lot in common. Not the least of which is that they are dreamers. Not all wear makeup and glitter, but every writer should strive to be as original and memorable as David Bowie. He kept us guessing. He was the red m&m in a bowl full of brown ones. This is what I have learned about marketing from the great David Bowie, the unequaled performance artist and storyteller:

Say something different or say it differently. Marketing is all about telling the better story. Marketing is easier and your work is more accessible because of social media and the internet— but that, in turn, makes it much harder to stand out from the crowd. Bowie leveraged his uniqueness. He instinctively knew that originality speaks for itself and great ideas always find an audience.

Being original is risky. But the riskiest thing you can do is play it safe. Risk includes failing, reinventing, going in another direction. Bowie always kept it creative by doing the unexpected and ignoring the critics. Just when we got used to Ziggy Stardust – he reinvented himself. He followed his instincts.

Bowie didn’t give up. His first hit didn’t happen until 1975 with ‘Young Americans.’ He was already famous by then – without a hit. He proved that you don’t need to sell millions (of books, records….) to be recognized. His tribe followed him. Being different and memorable is enough. Cha-cha-cha-changes are the only constant. 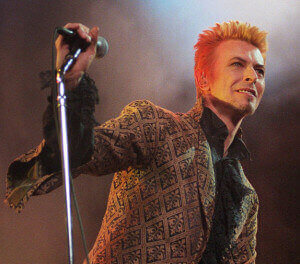 Bowie seemed to know that the Internet was shifting the relationship between artist and audience. While so many artists reacted with fear, he was filled with curiosity and was inspired by the technology. Bowie saw the 21st century as ‘the gray space in the middle.’ The place where the artist and audience meet and improvise.

As a writer, it is always about the dance, that engagement with the reader. Take them on the journey as you improvise.

Above all else, Bowie was an explorer of what it meant to be human. He took us places with his music and creativity. He remained curious and interested to find out how new ideas would shape him and his audience.

How will you change the world with your words?

Want to be more creative in promoting your books? Lynda will share advice and set you up for success, on the South Carolina Writers Workshop Podcast, Saturday, January 23rd @ 1pm. CLICK HERE FOR MORE INFO!

4 thoughts on “Finding The Courage To Be Yourself: What Writers Can Learn From David Bowie”